What Is the Environmental Badge for?

Each environmental sticker is issued for a specific vehicle and it is attached to its license plate. The validity of the sticker is unlimited, so unless you want to buy a new car, you do not have to worry about replacing it. You simply order it once and you can drive all over France.

Ecological Zones in France from 2016

Regarding the ecological zones, France came up with a few differences, if we look towards Germany or Austria, countries which we often use as comparisons. Initially, the obligation to possess an environmental badge "Crit'Air", applied only to drivers from France, i.e. cars with French license plates. Foreign vehicles have only had to have the sticker since 1. 2. 2017. You can find more information about the French ecological zones in the section Ecological Zones in France.

This section will present the types of environmental stickers that you can acquire when applying for the French „Crit'Air“. We will also tell you how you can order this badge and where to put it.

Six types of the environmental badges

France has introduced a total of six types of environmental badges. At first sight, these differ mainly by colour, and thus place your car into one of six categories according to its environmental pollution level, and allow police inside the ecological zone easy control. Each badge is issued on the basis of the registration certificate of your vehicle, and tells you how noisy and environmentally friendly your car is. 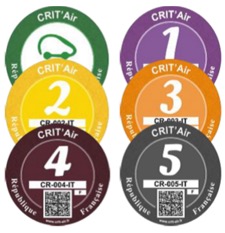 How to Order French "Crit'Air"

You can easily order the environmental badge for France online, enabling a smooth entry into the centre of Paris and other cities. You only need the registration certificate of your vehicle (part I. or part II.) You will receive the French environmental sticker by post within 14 days. Shipping is free.

Where to Place the Environmental Sticker

The environmental sticker for France is placed on the windscreen of your vehicle, either in the top right or the lower right corner. You can stick it, for example, next to the vignette.

As soon as you put the sticker on your windscreen, you can hit the road without worries. The environmental sticker enables you to enter the city centre of Paris and other ecological zones in France, according to the type of badge your vehicle has achieved.

Travelling to France by vehicle?

Get Crit Air for Paris, Grenoble and other cities. FREE delivery within 14 days.

Manage Cookie Consent
To provide the best experiences, we use technologies like cookies to store and/or access device information. By clicking “Accept All Cookies”, you agree to the storing of cookies on your device to enhance site navigation, analyze site usage, and assist in our marketing efforts.
Manage options Manage services Manage vendors Read more about these purposes
Cookies Settings
{title} {title} {title}