What not to forget when driving to Germany

Whether you travel for exploration, shopping or a business trip, familiarizing yourself with the main obligations and rules of driving in Germany is worthwhile - literally. You will avoid fines of thousands of crowns, or even a few months' driving ban. Overall, you should mainly remember to display the environmental badge when entering cities, to carry the compulsory equipment and to drive within the speed limits.

What it is and what it is for?

The Environmental badge (plaque or vignette) indicates the level of air pollution caused by a passenger car or a truck by colour: green, yellow or red stickers. Entry into the so-called ecological zones ("Umwelt ZONE") in city centres is allowed only to cars whose air pollution level is low. For example, currently, only owners of newer cars receive the strictest green sticker. You can find here the category of badge you will receive. Non-compliance is subject to a fine of 80 euros (i.e. approximately £ 73). 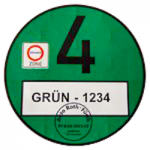 Where do I need it?

If you are heading into bigger German cities, you will not be able to avoid the need to purchase an environmental badge. Ecological zones have been introduced in, for example, Berlin, Munich, Dortmund, Frankfurt and other cities, a list which continues to grow every year.

You can order the badge online with free delivery within 7 days. You will need the information from the registration certificate of your vehicle when filling out the online order.

At least 1 high-visibility vest, a warning triangle, and a first aid kit are, as in our country, mandatory in Germany. If you fail to comply, you will pay a fine of 15 euros. If you travel in winter, remember the snow chains that are required in certain sections of the road.

Although there is no general speed limit on the motorways in Germany, the general recommendation is 130 km / h. Naturally, you must drive within the speed limits that apply to specific sections of the motorway. When driving in municipalities, respect the maximum speed limit of 50 km / h.

You don´t have to pay tolls on German motorways, yet. This is due to change in 2019.

Use of headlights during the day is not mandatory.

Foreign drivers are also given a penalty of 1 to 4 points for violating these rules. If a driver receives 8 points, a driving ban is enforced in Germany for up to 6 months.

Germans are more tolerant towards alcohol behind the wheel, and driving is allowed with 0.5 per mille of alcohol in the blood. However, this does not apply to drivers under the age of 21, bus and lorry drivers, and those who have held a driving license for less than 2 years.

Mobile phone use and other offences

You will pay a 60-euro fine if caught conducting calls on a phone while driving. Also, the rule for stopping on the motorway is stricter – an unfounded stop is punished by a fine of 30 euros, so it is definitely worthwhile waiting for a petrol station.

TRAVELLING TO GERMANY BY VEHICLE?

Get environmental badge with FREE delivery.

Manage Cookie Consent
To provide the best experiences, we use technologies like cookies to store and/or access device information. By clicking “Accept All Cookies”, you agree to the storing of cookies on your device to enhance site navigation, analyze site usage, and assist in our marketing efforts.
Manage options Manage third parties Manage vendors Read more about these purposes
Cookies Settings
{title} {title} {title}